The sky was all lit up in yellow in the middle of the night on Sept. 22, 2015, in France. This photograph (at right) was taken between 1 and 2 in the morning, hours before sunrise. 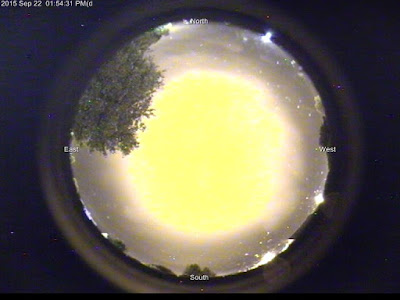 * There was an intense Planet X-related event on the eastern horizon on Aug. 18 in Fort Lauderdale, Florida, and it was captured by a webcam (see photo below).

Second suns, planets and various other anomalies are often visible on this webcam, especially around sunrise and sunset. Here's a link to the webcam: Fort Lauderdale webcam

A second sunset was captured by a webcam in Kauai, Hawaii, on Monday, Aug. 17. The photo above was taken at 7:29 p.m., about half an hour after the sun had already set further to the right on the horizon (see photo at left). It's pretty obvious that our solar system has been invaded by multiple celestial objects. This one looks more like a sun than a planet, but who knows? The point is, they're here, and they're about to cause some dramatic Earth changes, just as they have many times throughout Earth's history.

Like most of the EarthCams, the webcam in Kauai has an archive system for watching videos that were recorded during the previous 24 hours. The hours around sunrise and sunset are usually the most interesting. To access the archives, select ARCHIVES under the main video frame, and then select the hour you want to watch. Here's a link to the Kauai webcam

* Here's another video that shows Planet X on the eastern horizon at sunrise on Aug. 20 in Hawaii. It even casts an orange reflection on the water.

Planet X at sunrise in Hawaii

* Here's a video shot from an airplane that shows the second sun hovering over the sun. Second sun visible from airplane

* And here's another video showing two suns in the sky in Nevada: Two suns in Las Vegas

* And another showing Two suns in Turkey


* And another documenting a Second sun in the east at sunset

* Webcams all over the world are equipped with computer programs, filters and other devices that are used to hide Planet X and the other planets in the system from view when they become visible. They make them appear blurry or sometimes they try to make the planet look like a spider on the lens or something else. It's all part of the cover-up.

Another excellent Planet X channel to follow is Sasa Lucic. Here's a link to one of his videos:
Planet X setting with the sun in Nebraska

* Things were literally heating up on the Planet X front in 2016. It was up in the 90s in Seattle and in the 100s in Portland for several days during the first week of July, and also in the last week of July, which is totally abnormal. And there have also been severe thunderstorms with unprecedented amounts of lightning, torrential downpours and flash flooding all over the United States on an almost daily basis.

And webcams all over the world have been shut down lately in an attempt to hide something that would otherwise be visible in the sky.

You can clearly see in that video that Planet X is orange in color.

* The Weather Channel and other news organizations have tried to explain the pink skies caused by Planet X by claiming they're being created by forest fires in Canada. LOL!


This phenomenon is happening all over the world, not just in the Upper Midwest of the United States. Don't buy the forest fire cover story.

* The moon has been turning orange and red lately as a result of Planet X getting closer.

My understanding is that Planet X is visible only in the infrared spectrum when it's millions of miles away. As it gets closer, it becomes visible to the naked eye.

There are many planets and moons in the Planet X system, so perhaps some of the celestial objects that are showing up on cameras all over the world are not Planet X, but one of its moons or another planet in the system.

One of the planets in the Planet X system was captured, along with its moon, rising before the sun recently in Italy.  Here's a link to the video:
Planet and moon rise before sun in Italy

There was some fantastic footage of Nibiru, or some
object in the Planet X system, moving across the sky in retrograde orbit at sunset on May 30 in Michigan.

At least three additional objects were also visible as they moved across the sky in retrograde orbit behind Nibiru.  Here's a link to the webcam:  Silver Lake webcam

And here's a still photograph from the video:
* This video captured some recent sightings of objects in the Planet X system: Planet X sightings

* This video captured the second sun rising above the northern horizon at sunset on May 25:
Second sun rises in Italy

* This video captured two suns moving in retrograde orbit after the sunset on June 17 in Croatia. On the right you can see the orange light from the Planet X system on the horizon: Two suns in the sky after sunset

* And there are still more amazing photographs of the second sun here. I'm not sure, but you might need to be on Facebook to see these: More second sun photos 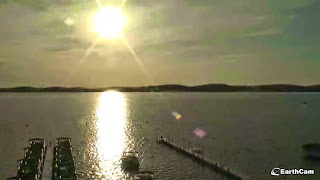 At right is a still photograph taken from the webcam around 8 p.m. EDT on May 22. Something that looks an awful lot like Planet X is to the left of the sun. If you click on the picture, you should be able to see an enlarged version that clearly shows the winged disk depicted by many ancient cultures.

On a clear day, you might be able to catch a glimpse of it between 6 and 10 p.m. Eastern time. The sun is not yet in view of the camera at 6 p.m., but sometimes one of the celestial objects near the sun is visible by then if it's below the sun near the horizon. The problem is, there's a deliberate effort to alter the pictures and cover up the existence of those objects. You can see it happening live sometimes.

Here's a link to the webcam:  Silver Lake webcam 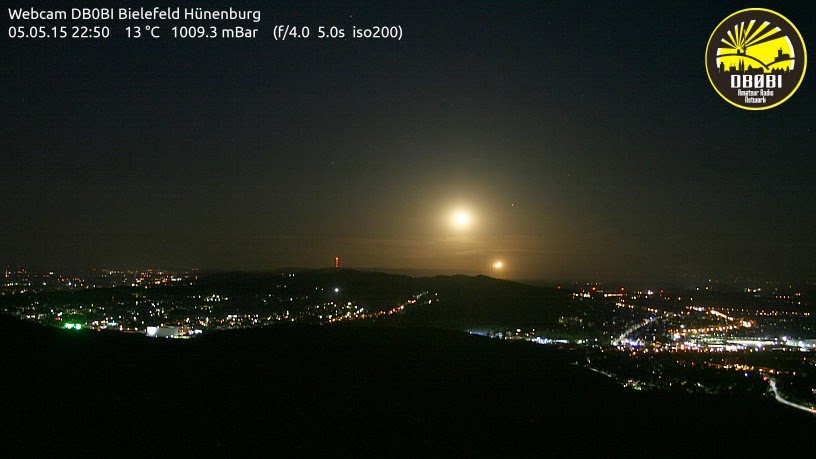 All this talk about the fall of 2017 could be a smokescreen designed to trick those of us who are aware of the impending catastrophe into thinking we have more time than we actually do. We'll have to wait and see.

Another reason why I think it's going to happen soon is the intense spraying of chemtrails that's going on everywhere, especially around sunrise and sunset. It's obvious they're hiding something. 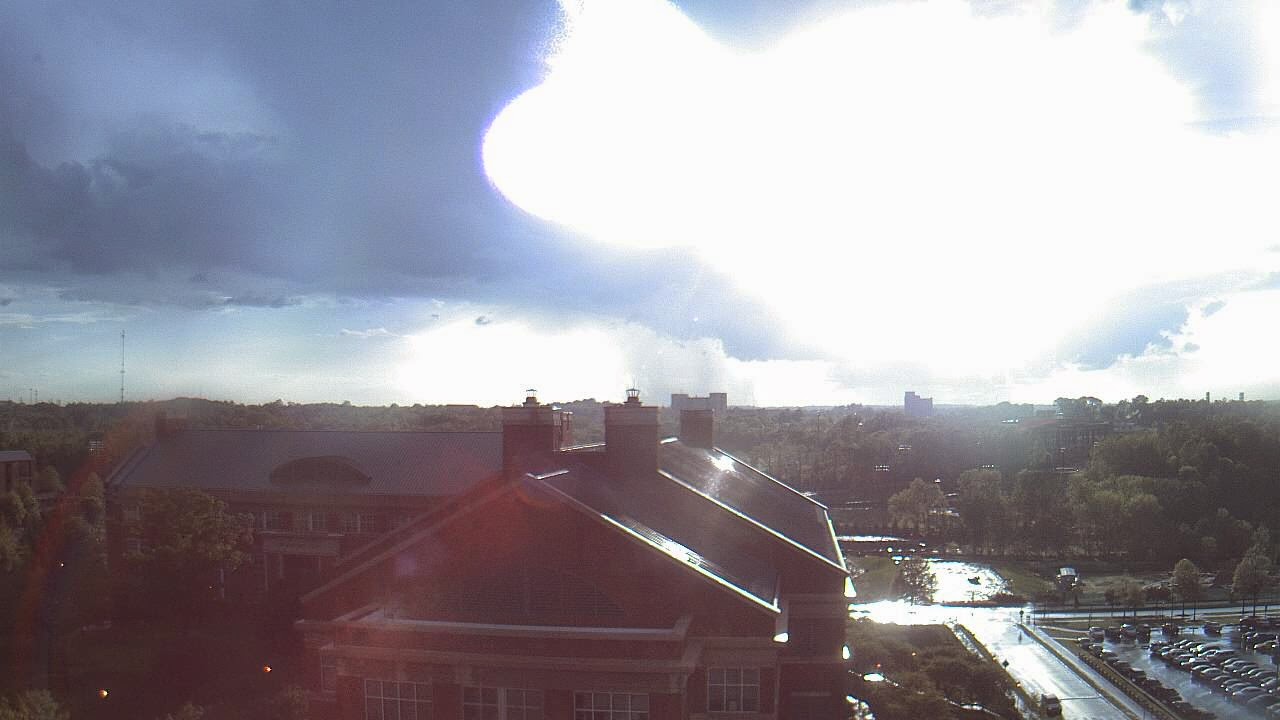 They can't close down all the webcams, though. The photo on the left was shot about 7 p.m. on April 20, 2015, by the webcam at the University of North Carolina at Charlotte, which faces west.

Two suns are clearly visible -- the smaller one on the left and the larger one on the right. I highly recommend this webcam and several others that are available on the web site of WCYB-TV, which serves the Tri-Cities area in Tennessee -- Johnson City, Kingsport and Bristol: Webcams in the Southeast 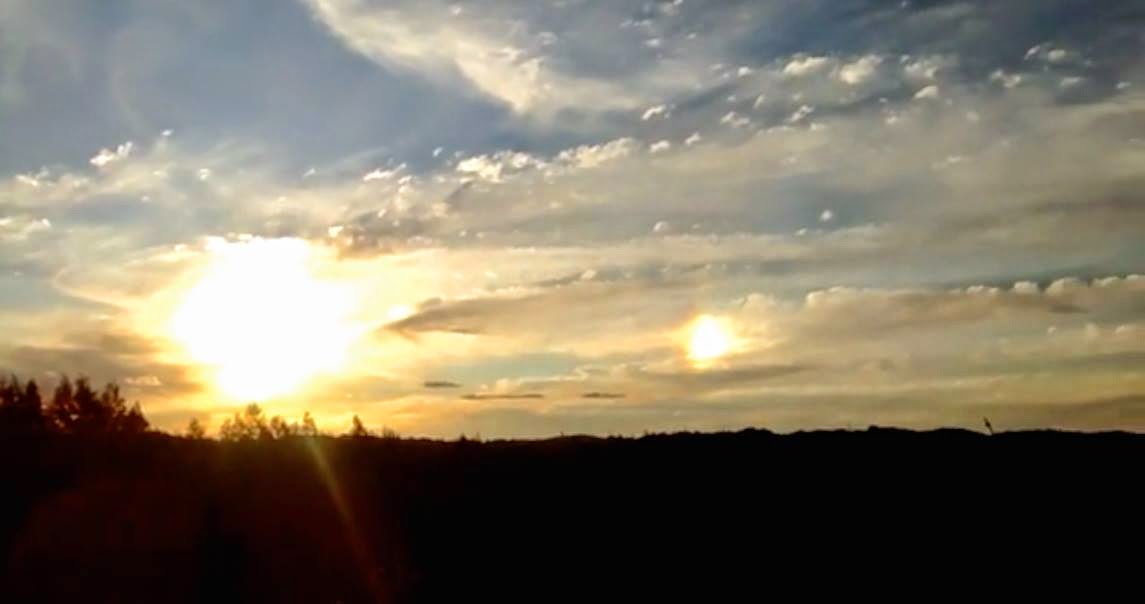 At left, the second sun also was captured on April 19, 2015, in Cangucu, Brazil. Another webcam site I recommend is Webcams in Europe. Second suns, second moons and lots more are the order of the day over there, and the quality of the cameras is excellent. 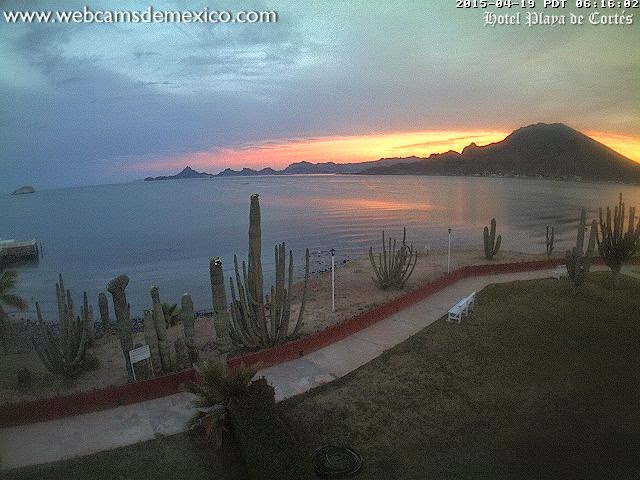 And how about this amazing picture (above) taken by the webcam at the Hotel  Playa de Cortes in Guaymas, Sonora, Mexico, at 6:16 a.m. on April 20? That camera faces northwest, and this picture was taken just as the sun was rising in the east on the other side of the world.

It's obvious that the sun can't possibly be the celestial object that's illuminating the western horizon in yellow and orange.  There must be a second sun or some other light source responsible for this. You can even see the orange light from Planet X reflected in the water.

Photos such as this one can be found virtually every day on the Mexican webcams.

Another phenomenon that indicates something abnormal is going on in the solar system is the appearance of the sun. This video from 2009 shows the sunset in Sweden, and the sun looks fairly normal in size.
Sunset in 2009

Compare that with the photo of the sunset taken by the webcam at UNC-Charlotte, posted above. The sun is much larger, and many people have noticed that it's also a lot brighter and hotter than it used to be. Plus, it's no longer yellow during the daytime, it's white. Sometimes it turns yellow at sunrise or sunset, but then it's white again the next day when it's higher in the sky. 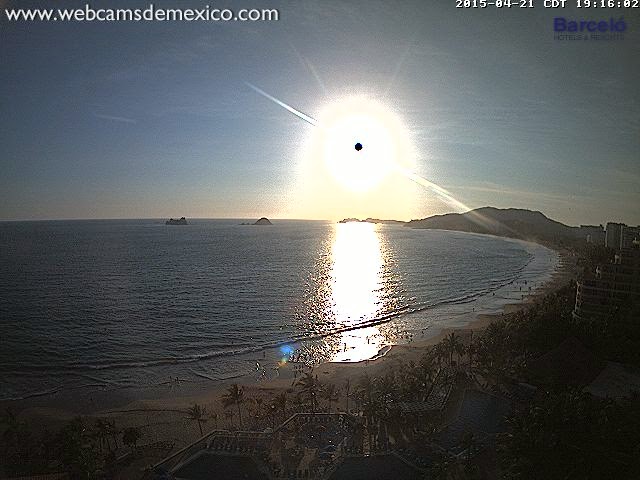 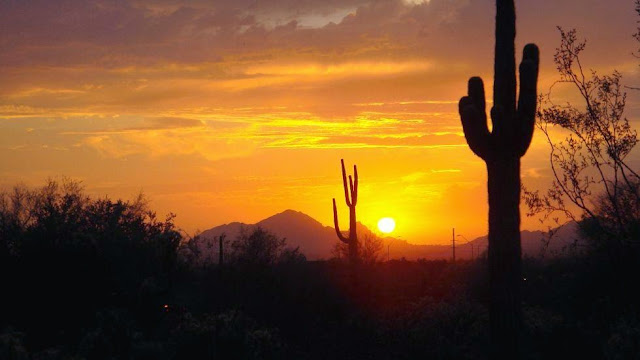 I posted some more photographs taken from webcams here: Strange Things Going on in the Sky I found something resembling a comet, a planet, a second sun and lots more.

The photo at left was taken at 9:50 p.m. on June 20, about 20 minutes after sunset at Silver Lake in Mears, Michigan. It shows the outline of a large orange sphere that's casting its reflection on the water. The yellow light from the second sun remained visible until 10:15 p.m., 45 minutes after sunset.

Another reason why I think Planet X will arrive this year is that it's now visible at sunrise from some locations. This video shot by a webcam at a Royal Air Force base in England on April 7 shows two large celestial objects rising alongside the sun. Soon after sunrise, they're no longer visible because of the sun's glare. See this: Planet X visible at sunrise

There's also a possibility we're dealing with something different than ever before now, but one thing is clear -- one or more large celestial bodies have invaded our solar system and they're already wreaking havoc on Earth.

Here are some interesting videos that will help explain what's happening:

* This one shows Nemesis and its planets rising in the east before sunrise: Nemesis and Its Planets

* This video presents evidence that a "solar wind" from a second sun is impacting Earth's magnetic field on the opposite side of the Earth from the side that faces the sun: Solar Wind from Second Sun

* This video uses satellite footage to document the suns and planets that have invaded our solar system: https://www.youtube.com/watch?v=m60kZbig_sM

* This one from September 2014 shows the second sun rising alongside our sun in Brazil:  https://www.youtube.com/watch?v=uSecppp_cZM
Posted by brussellsprout at 5:35 PM No comments: